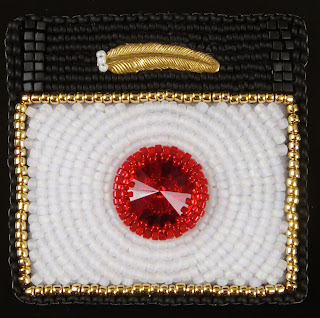 So. I think this one is pretty self evident. I woke up 3-11-11, saw the posts on FB, and ran to the TV. I started crying as soon as I saw the footage and went to wake my husband, feeling almost the same as I did on 9/11. It didn't matter that it wasn't in America, and that it wasn't terrorists to me, the loss of so much life, human, floral and fauna, devastated me.
Over the next few days, I read many, many blog posts and status updates that shared my sorrow and my feeling that the Japanese people were doing amazing, heroic things to cope with their incredible losses. One of these blogs, by my friend Nefer Kane, led me to fold an origami crane, a tiny little thing to do... but I encourage you to visit her website and read this post, and fold a crane yourself if you are so inclined.
Having folded my crane, I still felt that I needed to create something. I think many of us feel that we must create when we feel strongly, I don't think I'm alone in that at all. My husband and I discussed what would work for me... and we eventually came to the Bead Journal Project. I feel that this square is perhaps not as technically pleasing or precise as it should be; but I was distressed while I made it, and there was a sense of urgency while I was making it, that it HAD to be done quickly... so I just went with it. The feather above the flag represents a great many things, not only in different cultures, but person to person as well. In my case, I meant for it to represent hope, lifting of both spirits and difficulties, courage, and perseverance. Nobility was also something I thought of over and over; not in the sense of society classes and castes, but nobility of human spirit in times of disaster.
Posted by NEDbeads at 12:54 PM 19 comments: 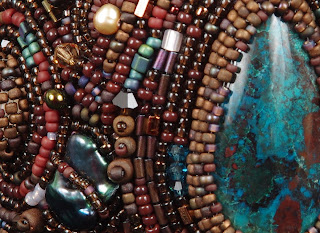 Good morning, all! I feel rather pretentious as I sit down to write this: I don't normally think of a theme or have a specific intent while beading away, the beads just put themselves where they want to be. And while that did apply a little with my new cuff, not as much as usual... so it happened like this;
Whilst browsing online (I should NEVER be allowed to do this while I have money in the bank, NEVER), I came across Beverly Ash Gilberts' site with her glorious bead soups. I could not possibly leave the site without buying something. The soups are just mesmerizing, and I had to pick more than one, too, of course. But this one in particular struck me, called Cafe Au Lait. HAD to have it. Yet, it didn't remind me at all of the name she chose for it. I sat down with it spread out on my bead mat when it came and stared at it for awhile, because the colors were just amazing to me. 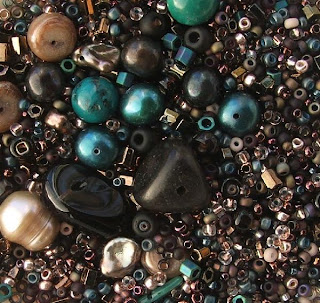 What to do with it? I know her mixes are just perfect for freeform work, but I wasn't in the mood.... the more I stared the more I wanted to embroider with it, but I couldn't think of how it would look laid out. I went to The Stash and combed through my cabochons, looking for one that perfectly matched the teal in the accent beads and actually FOUND one (I was so excited, I had been sure I would need to shop more - such a hideous trial that would have been, too, lol). I took my lovely cab (I don't know what the mystery stone is, I am only positive it isn't turquoise) and plopped it down in the middle of the soup and then used my hands to scoop the beads around it until it looked like it was half buried. And that was it; all of the luscious shades of brown looked like fertile dark earth in layers of strata to me, and the accents of moonstone and teal were like jewels found on an archeology expedition. My whole focus on the cuff became the intention of 'burying' these beautiful beads in such a way that people would be able to see these as unearthed treasures half buried in the ground of some ancient site. And so it became Unearthed, before I was even fully begun. 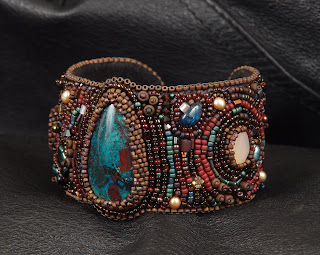 About a day later, as I was happily excavating, I saw Andrew Thornton's blog post for his word of the week: this week's word is Ancient. So I am going to post this to Andrew's comments for that post, I can't resist. It feels like everything worked in conjunction for this cuff to happen, and that I wasn't alone while making it, it's kind of incredible. I know it may not be the most gorgeous or sparkly of my cuffs, but I think it's my favorite, because of how it came together. 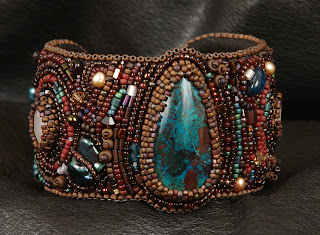 Being a sneaky, teasing sort of person, I posted my cuff to Facebook last night without announcing the name, because I really wanted to see if I had succeeded, if anyone else would see what I had seen while making it. I really love all the different interpretations I got in response, some of them were just wonderful, and gave me the opportunity to look at it from different perspectives. Some of my favorites were:
‎"...late autumn... when there is but a hint of color left in the leaves..." - Robynne
"It is similar to Hopi Indian beadwork that is very spiritual. In Navajo rugs with similar patterns, there is a beginning and a physical outlet within the design for the spirits within the pattern." - David McKinney
"Sort of reminds me of treasures in wet sand. That matte brown along the edge and in the cabs is great." - Kim Spooner
"Tamed Wilderness.. I think.. Its raw, and beautiful and you tamed it..." - Diana Curtis
"My gut response to it was something like 'Dream Path'. I think it looks like the paths that some people walk in China for natural reflexology." - Jeri Kennedy
"...beach with pebbles and blue sea." - Jan Fly 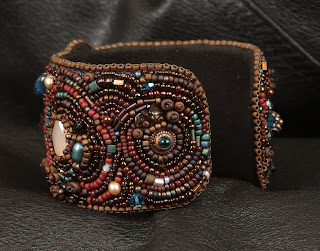 And I was amazed at how many people included the earth in all of it's variations in their interpretations, I am thrilled!! It is really touching to me that I was able to conjure part of what I had intended. I know, I know it's just a cuff - but it was more than a cuff while I was making it. Thanks to all of my friends for responding with your reactions to it!! And now, off to start the next Super Secret Project, lol!!
Have a great day! 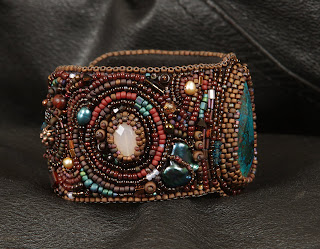