Those of you who follow my blog know that I have a hard time with the tutorial side of the beading world... creating them, I mean- it's definitely easy for me to buy them from others! But I have been trying hard lately to move myself in that direction, in order to share what I have learned through my beading play times.
While making the Sugar Plum Purse, I had a heck of a time coming up with a strap for it, and just couldn't settle for any of the straps I had seen or learned, so I started playing around with right angle weave. I wanted to match the rectangular focals, and so the chain needed some rectangular bits in it. It was pretty, but not too strong, so I went through and reinforced every single stitch, until it acted like a chain, folding on the 'links', rather than curving. After posting the purse on The Beadsmith page and here on my blog, I had a few requests to write up the chain as a tutorial. 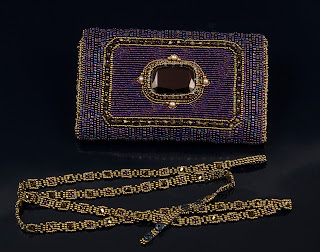 Pretty as it was, I felt like it was too small of a project for a whole tutorial on its own, so I sat down to see what I could make with the chain that would be a bit more substantial, while still showing the original pattern. I thought that stacking the chains atop one another would look nice, but when I tried it, the symmetry made it look much too rigid for me, so sat and stared at it for an hour or so before wondering what would happen if I staggered the units. I really liked how that looked and decided to go with it. I wanted to show how versatile the pattern was, and so made three of them in different widths and colorways. (I HATE making more than one of anything, so that is one of the really hard parts for me as a designer; by the time I've made three I never want to look at it again. Earrings are worse. Unless they're embroidered.) 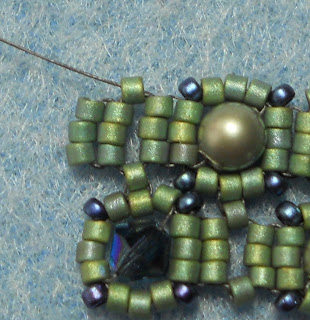 Sherwood is the photographer, not I, and so I was so proud to take the tutorial photos on my own and get the whole thing done by myself. HUGE feeling of accomplishment, even though wild dromedaries could not drag out of me just how many photos it took of each step to get a clear one that I was happy with (around 12). I knew I wouldn't get any that I was happy with of the finished work, so Sherwood did take those shots, and he did his usual outstanding work. 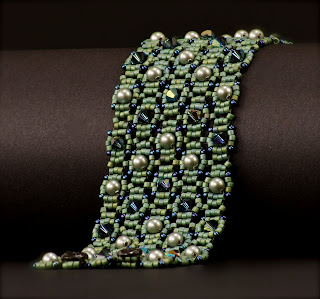 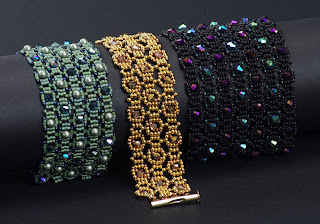 If you would like to make one of these Labyrinths, you can find my tutorial for sale here.
I've also been wanting to put a new page on my website, featuring the work that others have done with my tutorials. It's delicious to see what colors others choose, and how style can change a design. There are a few wonderful beaders out there that have taken a tutorial and changed the design around to come out with a whole new project, and I really treasure those, it makes me so happy to have given them a starting point from which they were able to leap off on their own. So if you've made on of my projects, I would love it if you would email me with a clear, crisp photo of your piece, the title if you've given it one, and your full name. If you'd like to include a link to your own shop, or your blog, feel free to drop that in too and I will include it if I have room. My email is nedale67@gmail.com.
Last but not least, I am trying to figure out which tutorial to write up next and would welcome any comments on the photos below; which one would you like to see as a tutorial?? Once I get the votes in and choose the one to do, I'll draw a name from the votes for that project, and then I'll send that person a free tutorial once it's done. :) In descending order, they are: Gypsy bead embroidered earrings, Climbing Rose, and Triple Twist. 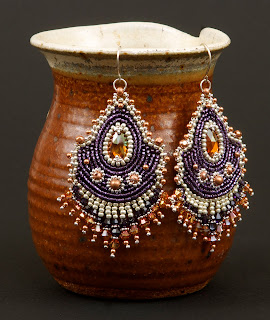 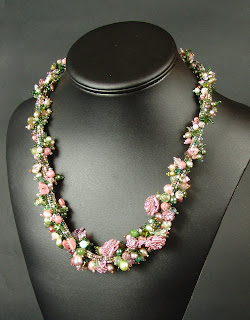 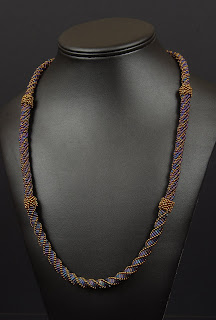 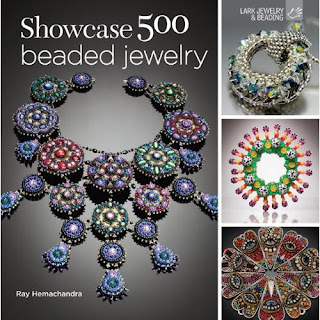 Yes, I am dancing around and thrilled down to my shoe soles! I had the incredibly wonderful news yesterday that one of my necklaces has been juried into Lark's newest 500 series book, 500 Jewelry!! If you haven't checked this out already (how could you not, with beaders linking to it every which way on Facebook and blog alike??), make sure to go to Amazon or your nearest book store and earmark this book for your future purchase and enjoyment. I am humbled and honored and amazed to be included in this compendium of wonderfully talented ladies and gentlemen of the beading world. Congratulations to everyone who juried in!!!!!
When I received my notification, my jaw hit the floor and then I had a huge burst of adrenaline, and spun around the kitchen laughing so loud my dogs came running to find out what was up. Later on, once my joy had settled into a nice warm spot in my chest suspiciously close to where a heart should be, I found myself thinking back on all of the people, beaders and not, who have encouraged me to keep beading, especially when I felt like it wasn't worth it, or that my pieces were never going to be 'good enough.'
My gratitude for this help and support then brought to mind how rampant thievery is affecting our beading communities. At nearly the same second I got my notification of acceptance, it was posted online that one of Sue Horine's amazing pieces of art had been stolen right out of her shop. All month long, there have been people finding more and more of their patterns, tutorials or designs being flagrantly copied or sold without their permission, design credits not given... on and on.
Let me explain how the one leads to the other in my (decidedly odd) head: Without the support and generosity of my friends, and my fellow beaders, especially those who were quite well known, I could not have learned enough about beading to make a go of anything I made. Several of these beaders were kind enough to teach me things free of cost, so that I could advance myself through stitches or projects that would show me tension or needle control, or how to get those beads to line up the right way. Some of the teaching included tutorials and/or patterns that they normally had for sale, and would have sold me; they certainly didn't have to give them to me. These same people could most certainly at least hesitate in our current environment of thievery, to share the same things they shared without a qualm years ago, and I wouldn't blame them in the least. Giving something freely, or having it forcibly wrested from you... I worry that with all of the stealing and underhanded dealing going on, that we may, as a community, start to withhold the knowledge we have in our attempts to stem the tide. I have attempted to pay it forward always; to teach anything I know (within reason) freely, to share techniques and stitches and tips and tricks... and I will keep on doing so, and most of the beaders I know will, as well. But there is only so much that the designers as a whole will take, and it frustrates me to know that the thieves will eventually make it very hard for the beginning bead artist to get where they need to go.
If you see Sue's beautiful necklace out there anywhere, whether being worn or offered for sale, please identify the person and report the theft. Here it is: 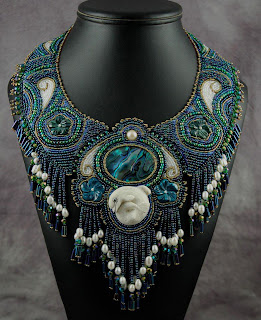 And I leave you with a photograph (taken by my wonderful husband, of course) of Regency, the necklace soon to be published: 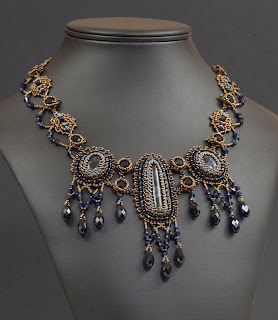