Horn of Ammon and Artbeads' What's Old is New Again 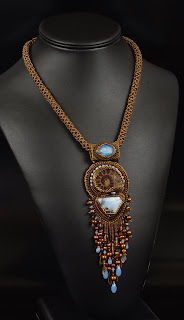 Good morning! I am so thrilled to let everyone know that I have been accepted into the Artbeads Design Team! I have admired the beadwork of all of the artists involved with this, and have been inspired by many of them, so I was mega excited when I was told I would be able to participate. The beady challenge this time was to create something to the theme "What's Old is New Again."
I really loved what Mikki Ferrugiaro made - her ha'penny farthing necklace was just so perfect! I set out on a search around the house to find something old of my own that I could bead up... and couldn't locate one object that seemed right or that inspired me. I sat down and just pondered on 'old.' Happily, rocks and fossils crossed my mind quickly and I found some perfect examples in my stash. Since I adore embroidering around cabochons, this solution pleased me no end.
I chose an ammonite fossil and a honking big Boulder Opal that I have been hoarding forever, and a Swarovski crystal that just needed to go with them. The ammonite is actually a cephalopod from wayyyyyyyy back, which went extinct somewhere around the same time as the dinosaurs, so I felt that it was, indeed, old. Pliny the Elder had named ammonites ammonis cornua (in 79 AD, my G!!), Horns of Ammon, due to their resemblance to rams' horns - and the fact that the Egyptian God Amon was usually depicted wearing such headgear, and I loved the name, so now I had my title, too. Then came the fun part - I got to go to Artbeads and find some beads! Their button was perfect for my clasp, and the Swarovski crystal air blue opal pendants were out of this world, and the brass drops had to be included, too. I modified the brass components by taking the larger part of the drop off, and sanding down the edges of the small bits left over to use alone. After all of the embroidery and embellishment, I decided to go with simple for the strap, and used a version of my Trellis rope. 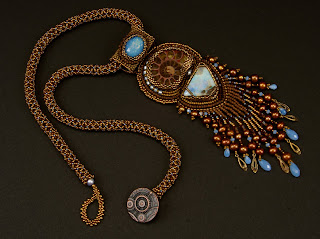 The absolute best part of creating this was watching all the varying bits come together and become something cohesive, because at the beginning it felt like I was just grabbing odd bits and beads and hoping they would work together somehow.

I've also managed to finish two other projects recently, one of which was a UFO that has been sitting for almost a year; Sunrise. This one has a sunstone focal, and the pendant is reversible as the bezel is open on both sides. The rope is a version of my ColorPlay ropes in cubic right angle weave. 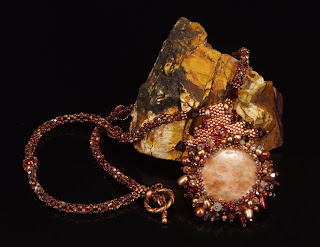 ColorPlay Versions I and II. (Version II has already found a new home with the wonderful and talented Juls of Julsbeads!) 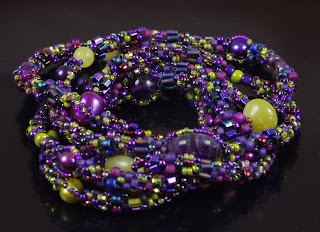 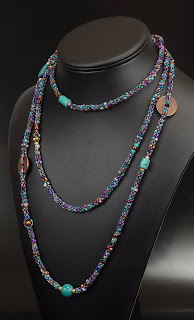 And, Sands of Time was made during March. I can't tell you how much I lovelovelove this cabochon!! (And thanks to Robynne for the help with naming it!) 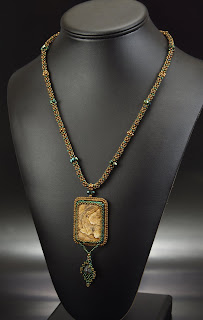 I've also listed quite a few new things in my Etsy shop, NEDbeads, stop by if you have a minute!
Artbeads has provided me with materials free of charge for review, and have not compensated me in any way for my opinions or product endorsements.
Posted by NEDbeads at 8:24 AM 21 comments: