Wow, what a busy week! Between all the errands and housework, somewhere in there I found some time to bead, and my husband found the time to take the photos. I have completed one new necklace which I entitled "Snowbound" after the name of the beautiful lampwork bead that adorns it. This is simply spiral stitched, with three bevelled onyx beads and a beaded toggle to finish it. The lampwork bead was made by That Bead Girl, and I found her on Ebay, if anyone else wants to look - she is a wonderful artist. 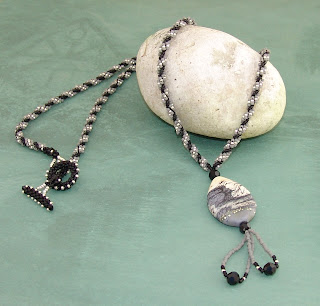 A also managed to make a small bracelet using a filled netting technique which is new to me, and lots of fun. I will have to make another one, and think of something more blingy to make it with - although think that all crystals would be a bit too much. I used freshwater pearls in lavender and threw in some 3mm crystals for contrast here and there and used sterling for the clasp. I think this looks vaguely wedding oriented, which is definitely off beat for me! 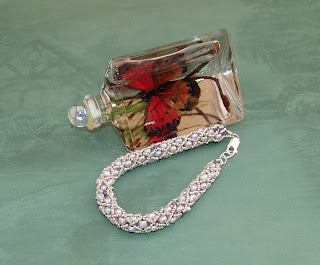 Lastly, I came up with another cuff (of course!), and this one actually has a bead as the centerpiece rather than a cab. I believe that this is an agate, but did not think to write down the name of it when I purchased it. During the making, I kept thinking of fire, but when I was done I felt that the colors were more autumn than burning, so I named it Harvest. The picture at the top of my blog shows it full front, so I include a picture from the side: 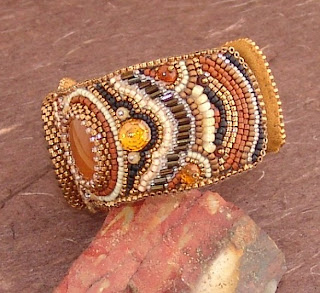 I used less 15s in this one than in the last two, and put in two cubic zirconia crystals which I adore. I also had just gotten in some really gorgeous size 1 bugles, which I decided fit in there great.

This week has really been full of design and inspiration challenges, as well. It seemed that every time I turned around I was questioning what I had started, and wondering if the colors worked, or having problems with the next step. For two days I have been wandering through my bead collection (HUGE!) and sorting and organizing, in the hopes that something would hit me over the head and say "Create with me!" I took a grip this morning and have started gluing up the next cuff, but am still feeling creatively stuck. I am hoping that the muse will return VERY soon! In the meantime, the focal beads have arrived for two more of the commissioned necklaces, and as soon as the supporting beads arrive, I will be getting started on those. (These focals include the big, intimidating, expensive focal - so everyone cross their fingers for me, please!)

On! On with the beading!

I did not realize until today how long it had been since I wrote here, and boy do I need to get going! I have since finished two more necklaces and a new cuff. The cuff is my favorite, I had a wonderful time making it and was sorry when it was finished, even though I couldn't wait to wear it!
Lavender Dreams : This is the second commissioned necklace, and I made matching earrings to go with it. These gorgeous lampwork beads were handmade by Kandice Seeber of Air and Earth Designs, which my friend fell in love with. I love them as well, and think that they go great with the gold findings. Please visit my website for a closer look at this so you can really appreciate Ms. Seeber's work! 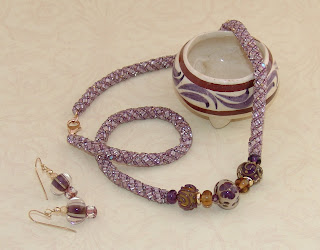 Deco : This second necklace's fate is so far undecided. It may be for my commission, or my friend may elect to have me create a different neck piece with a different focal. This is a stone bead rather than a lampwork bead, and I had to make it into a pendant as it was soooo heavy. It is rhodochrosite bead, with faceted onyx and crystals. I decided to call it Deco, although I am still not sure that I am happy with the name. 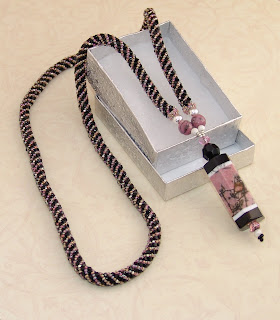 Oceans : This is the cuff!!! I love this cuff, did I mention that? I am keeping it, I think, as I could not bear to part with this one. I am hoping that I will find another Blue Lace Agate cabochon somewhere (anyone seen one?) so that I can make another one to go out into the world. The cab is surrounded by crystals and the two side cabs are Labradorite. This has so many different kinds of beads on it that it would take a whole page to list them, so I haven't. I have side views of this on the website, as they are both different and asymmetrical. 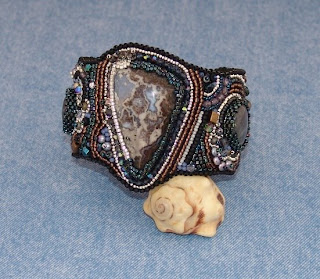 I also have completed my first pair of woven earrings in a year, and put them up on Facebook and the web site. They were fun to make, but really easy, so they gave me a break from the complexity of Oceans, but they took no time at all! I am thinking that I may make some more, whether they be metal or woven, as I am thinking of listing a few things on Etsy to just kind of dip a toe in the water.

I have also had a local store owner offer to have some of my pieces for sale in their shop this week, which thrilled me beyond belief! I may actually be on my way, and I am so excited about it!