Hi everyone.  It's been ten months since I posted here...  sorry for the long wait.  The intervening months were full of personal losses that don't really belong here on my blog, but I am hoping that the bead muse will finally be coming back to me now.  I am working on a bead embroidered cuff, and have managed one small bead embroidered pendant, so I thought I would share the pendant and a few thoughts on bead embroidery in general.  :)

This little lady is created around a handcrafted cabochon goddess from SweetBananaBerry on Etsy.  She didn't need much to ornament her, she was so pretty to begin with!  I am lucky enough to have several more (all different) of these cabochons and look forward to making more pendants - it was a fun project.  She's made using 24t gold AB seed and cylinder beads and Swarovski components in Summer Blush and Crystal Copper, as well as a CZ in light olivine.  Her chain is a variation of my Changeable Chain tutorial, with 2.5mm and 3mm crystals added on top of the weave in the front. 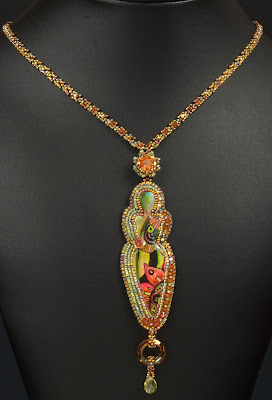 At the moment I am working on a cuff using a huge boulder opal, and three opal doublets with matte metallic and metallic beads, as well as some beautiful swirly 'relic' looking polymer clay components made by Barbara Briggs.  Although the goddess pendant is faintly freeform in the actual embroidery - I didn't try to be perfectly symmetrical - this cuff is very freeform in approach, and while it will have a static border, the inside landscape is hopefully going to just go where it wants to.  While I was working on it, I was thinking about things I do in my embroidery and thought I would share them with you...  I have no idea if they are things that are already out there in someone's books, or if they're unique to me, but it's how I approach stuff in my own work.

One of the things that really bothered me when I first started embroidering with beads, was getting the spacing right between beads/rows of beads.  I seemed to always be bunching them up and getting bumpy lines rather than nice, neat flat ones, and my rows of beads also seemed to end up too close together, crowding each other and sort of piling up.  I think I made it harder on myself because I started with cuffs rather than pendants or collars - and with cuffs, getting things to space neatly is even harder, because you're working flat on something that will end up curved around an armature or a wrist.  While the space might look perfect while you have it on your mat, when you put it around your cuff blank or your wrist, all of a sudden you're seeing gaps and backing.  Argh!!   I'll talk about the flat embroidery first and go on to the cuffs after.

Do you have issues with stitching directly up through the middle of your bead line in backstitch?  I do!!  I always seem to end up just off enough to make my line wonky.  So I gave up trying to get that needle to come up directly in the line.  Instead, I choose a side of the line and consistently stitch up as close to the middle as I can.  Usually this means my thread is coming up to the right of middle.  As long as I make sure that I don't inadvertently stitch off to the left, the line stays consistent and this way, although my stitches aren't perfectly in the middle of the line, they still make my beads line up correctly because I am always on the same path.  And I struggle much less. 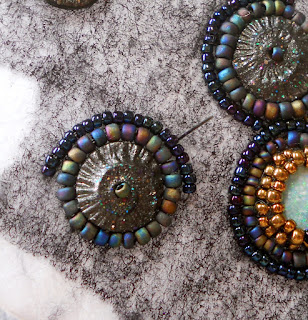 When I was always trying to stitch directly between beads and perfectly in the middle of the line, I also noticed that my bead spacing was way off...  The needle would move the line a little and disguise how much space I actually needed when laying down the next set of beads; by stitching to the right slightly I don't disturb the beads.  I would stitch down too close to the last bead I strung and it bunched my beads together.  I solved this by leaving myself too much room.  I now lay the beads down, snug them up to the rest of the line, and then stitch down about a bead away from the last bead added.  This means that I have room to move the beads either forward to smooth out a bump, or snug them back tighter to hide exposed thread before adding the next set down, and makes it much easier to get a smooth line.

In fact, too much room is my catch phrase now.  Because we always snug them up, don't we?  And go through the entire line of beads again, always, even if it's a short line.  Going back through the entire line of beads  again is massively important for two reasons (and probably more!) - it aligns the beads up while tightening it at the same time, and it gives us a handy way to make adjustments if things still don't look as nice as we'd like.  Now that you have that long thread stretching the entire length of the line, if you adjust that thread in any one spot, you will be adjusting the beads, too - all along the length of the line.  So if your curve is looking a bit iffy, and you can spot that one place where it seems to be hung up, you can do a couching stitch (pulling one way or the other) on your thread to adjust the line, or you can stitch through just one bead and pull the line whichever way you need to; it will effect beads on both sides of the one you adjusted, and subtly down the whole line.

When going around things, bezels and such, I stitch as close as I can to the bezel for the first row of beads only.  After that, I give myself too much room again.  On the second and subsequent rows, I place my bead line about half of a bead size to a whole bead size LARGER, away from the first row.  If you aren't doing a full line all the way around the object, you may see a hair's worth of backing.  Remember that you're pretty much the only person who will be seeing your work at this close of range, and that the hair's width will not show later, for a variety of reasons - the color of the backing, how close your next line of seed beads or accent beads will be (as they may shift it and hide the backing), etc.    For example, if I am outlining a circular object, like one of Barbara's swirly pieces, I will start my line of size 15s as if I were actually placing a line of 11s. (If I'm using 11s, I give myself a space that is approximately one and a half 11s.) I continue this placement all the way around, and I come up for my next backstitch on the outside of the line rather than the inside or the middle. 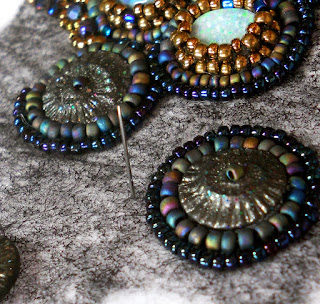 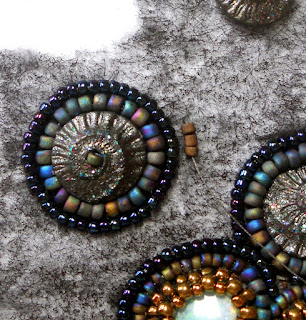 The beads naturally curve slightly closer than the stitching as you lay them down because you're going around. 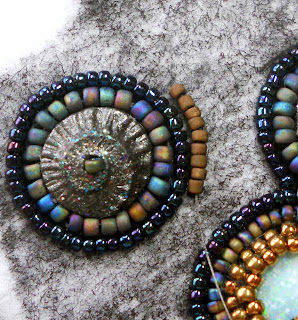 Then, when I go through all of the beads again, the second line snugs up to the first line withOUT bunching up the two rows, and without possibly popping the object up from the backing (which can happen with glued components or components which are held down with a single bead, such as this - the beads being too tight can cause the glue to give and lift your object). 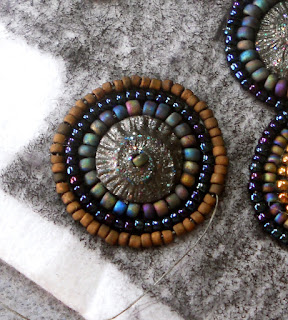 Finished circle without going through the line again 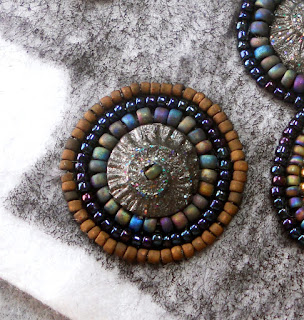 When it comes time to add stop stitches I give myself more room than I need to place those too... and if some of the backing shows through, I can always put in a size 15 to hide the space.

When I work on a cuff, I do all the same things, with the exception of the very center, where I will deliberately crowd a few lines, so that when I curve the work, it will lie smoothly.  The middle three inches will need less spacing and more snug work than the sides and toward the back.  On these lines or accents, I will stitch just the size of the bead, not a half size or full size larger, and I will come up on the inside of the line rather than the outside when backstitching lines unless the line is around an object.  Complete a small portion at a time, and wrap it around to check - if there are gaps or spaces showing, adjust your beads accordingly, or add in either size 15s or charlottes.  Most of the time, if you've gone through your work with a single line of thread after you stitched it down, you can use that thread to adjust your spacing rather than having to redo the whole line.   In the photo of the center of the work on my cuff, it's laying flat on my mat, and the work looks bunched up - but when I wrap it around the cuff blank, it lies smoothly and the beads don't look crowded. 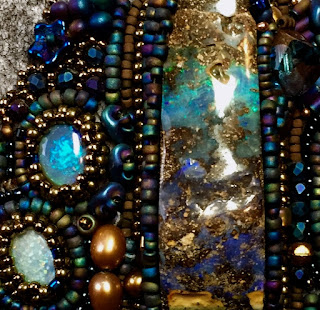 I think a lot of it is about practice, and getting used to bead widths.  If I am using a shaped bead (such as the Superduos here), I have to really think about the placement and how much room it will need, while working with seed beads is more of a habit, where my hands just do it.

I hope some of this was helpful rather than boring, lol.    I also hope it won't be quite such a long time between posts now... and that you all have a wonderful evening.