Hello out there!  Here's to hoping you had a fabulous September and are ready for a wonderful November.  October... well, it's a bit challenging, eh?  But we're slogging through.  :)  Did you try Chenille Stitch last month?  Was it fun?

I did a few more things with Chenille before I switched gears...  I wanted to see if I could do a version of a Color Play Rope (I wrote a blog post about them back HERE, it's my take on a freeform-ish CRAW rope) in Chenille, and it worked!  I really had fun with it, and I enjoyed working in a color way I don't use a lot - caramel and green apple.  (And now I'm hungry, lol!) 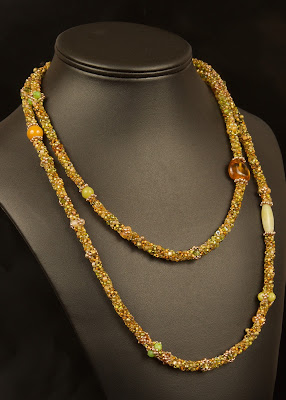 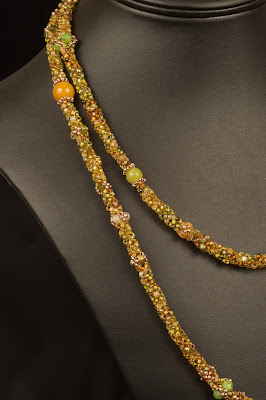 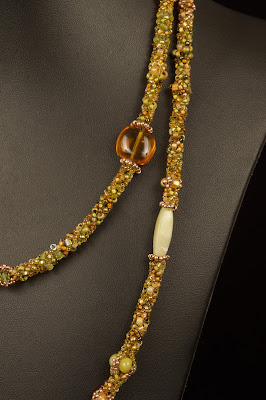 And then a mostly filled in rope using my Regency Bangle/Rope as a jumping off point, and a gorgeous bead made by Julie Schmidt-Bowen (who has beads for sale HERE if you're tempted - and I bet you are).  I used my favorite 457 and matte iris blue/purple seeds and fire polish. 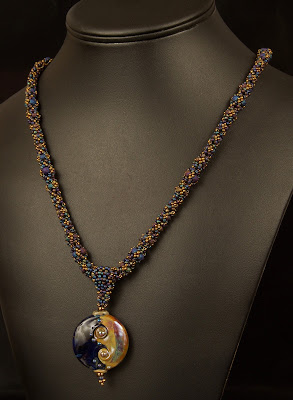 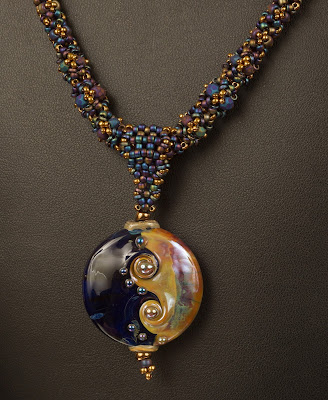 I tried and tried to like Flat Chenille, but I just couldn't get myself going on it.  So I went and researched Pondo Stitch a bit, and ended up making this bracelet - but haven't yet found a suitable clasp. 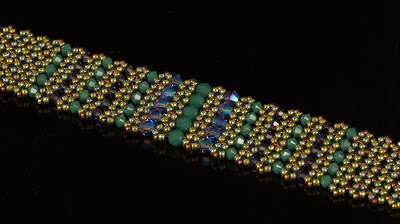 THEN, I began working in earnest for October's prompt.  Which is...  Hubble Stitch!!  Hubble was invented by bead genius Melanie de Miguel - she has not one but TWO books devoted to Hubble Stitch.  Once you've gotten the hang of it, it's completely and utterly compelling and addictive.  I set out to work my way through both of her books and do at least a swatch of each and every variation and project in every chapter.

If you haven't gotten Melanie's books yet, I can't recommend them enough.  This stitch is so versatile!  And so fun!! And has such a wonderful feel to it, both while you're stitching and when you're done.  You can make flat pieces, dimensional pieces, ropes, bangles... you name it.  These are some of the beautiful projects Melanie has made, both from the books and as workshops (all photos are Melanie's, and used with her permission): 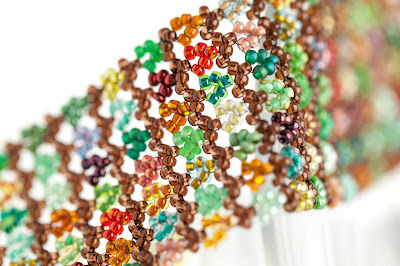 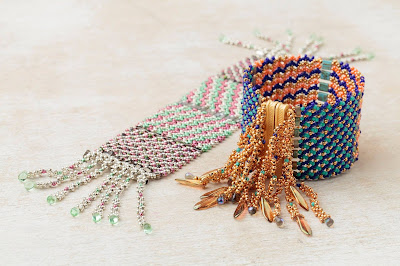 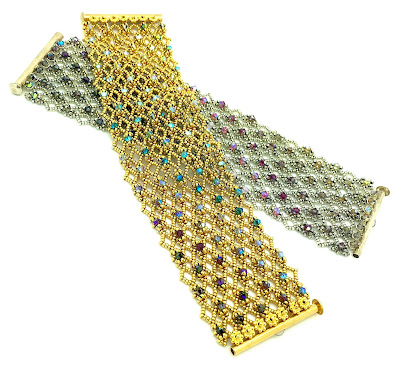 The first book is called Let's Hubble, and you can grab it on Amazon HERE if you don't have a copy yet.  The book describes the bones of the stitch and then takes you through variations and projects with extremely clear instructions, photos and diagrams (as well as a sense of humor and the feeling that the author is sitting right there with you as you bead).  Hubble is constructed in units, just as right angle weave is constructed in units - but it is not right angle weave.  It's a creature unto itself and it's awesome!  The very first row can be challenging as you are just starting out, but once you've gotten into the rhythm, it gets easier and easier. 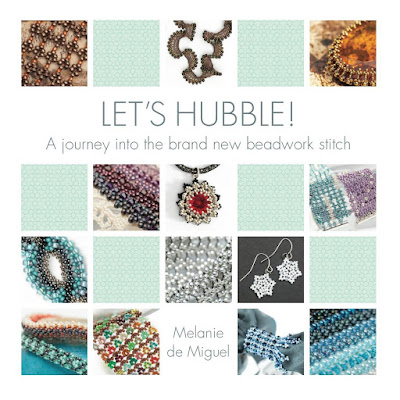 Marcia DeCoster has also designed with Hubble, in both her fabulous Cryptex vessel necklace, and her amazing Wind Beneath My Wings bracelet.  (Both of these are workshops and unavailable as kits or tutorials right now.) 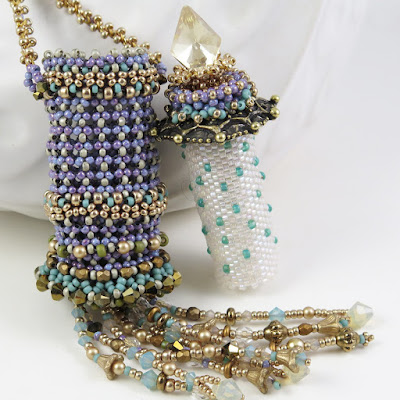 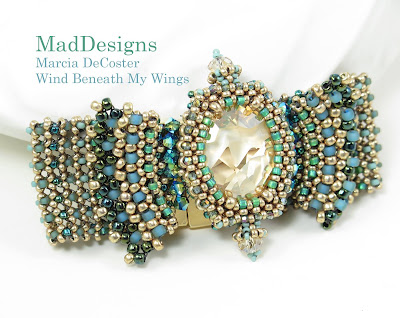 I made it alllllll the way through Melanie's first book, Let's Hubble! and  I enjoyed every single swatch and project.  With some practice, I was Hubbling in no time.  Here are my swatches: 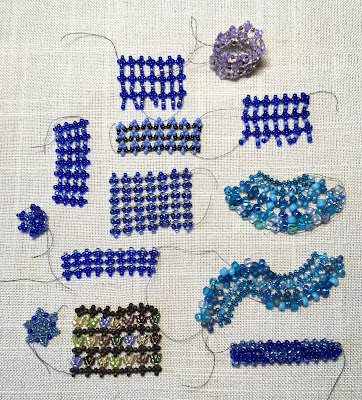 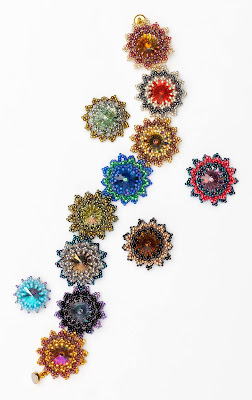 I can't seem to get my tension right on this one, and need to work on it much more.  I have a hard time figuring out how to hold it while I stitch.  Mine looks rather sad, here: 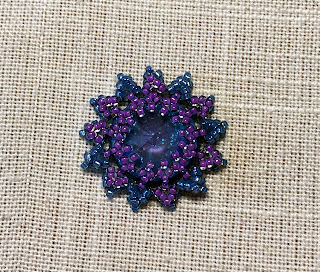 But I messaged Melanie on Facebook (she is incredibly helpful and patient and friendly), and she has given me some pointers, both on bezeling and working in the round.   I will be trying Solar Flare again, and with her help I'm positive I will do better. 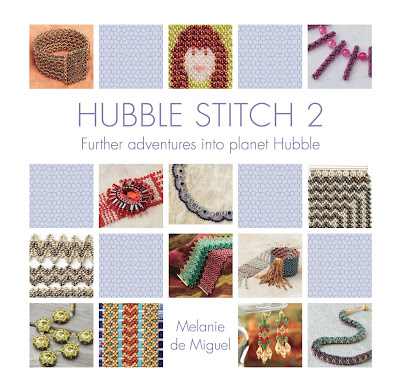 Book Two is called Hubble Stitch 2 - Further Adventures into Planet Hubble and is available in both hardback and Kindle formats (yay! I grabbed the Kindle version for my iPad) HERE.  It brings Hubble to a new level, with gorgeous projects and variations on Wave Hubble.  And for me, Wave Hubble was actually easier to master than the original Hubble - the units flip upside and downside, and the beginning rows are a BREEZE.   If you have tried Hubble and have had problems with your first row, I highly encourage you to grab this second book and give Wave Hubble a try.  You won't  be sorry!

I made it most of the way through Hubble Stitch 2, but I got sidetracked once I reached Chapter 6, which deals with Horizontal Wave Hubble Ropes.  I fell madly, madly in love with these ropes and made a total of six bracelets so far - five in the original format and one in Double Wave Hubble.  Once I had the technique down in size 11s, I had to immediately do some in size 15s, and I added in True 2 fire polish beads.  These are sooooooo meditative and soothing and calming, and at the same time so fulfilling and exciting!

My swatches from Hubble Stitch 2: 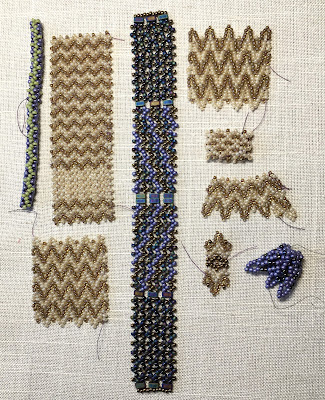 And my stack of Horizontal Wave Hubble Ropes - squeeeee!! :) The second photo shows a wrap bracelet I made with WH, and added in some lamp work beads by Julie Cannon.  You can wear it as a necklace, too, but I really like it better as a bracelet. 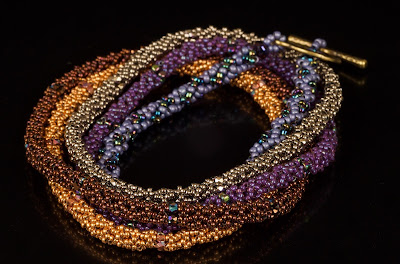 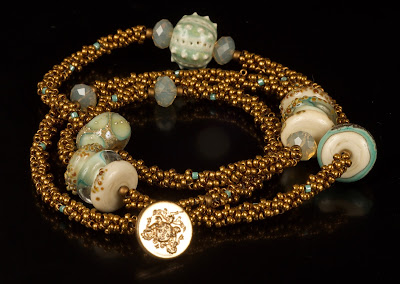 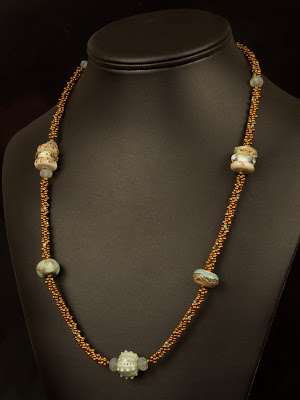 I hope you decide to take on Hubble or Wave Hubble (because ROPES!!!!), and that you have a great time with it this month.  In case you're looking for a place to share things or ask questions, Melanie has a page on FaceBook just for Hubble HERE.  See you around in our group or just on social media, and see you next month! :)